Crisis of Character: A Review

*Editor's Note: this review is for the audiobook, reading by Brian Troxell.

Bill and Hillary Clinton can be seen two ways, depending on your political persuasion.  They can be seen as a loving couple who have devoted their lives to public service, working towards making the world a better place (that would be the liberal point of view).  They can be seen as a cold, calculating pair interested only in holding on to the power they think is their divine right, enriching themselves in the process (that would be the conservative point of view).  Crisis of Character comes from former Secret Service Agent Gary J. Byrne, who was part of then-President Bill Clinton's protection detail and was ensnared in the tumultuous Starr investigation that nearly brought down his Presidency.

Those on the Right or Left who might expect a no-holds-barred takedown/monstrous slur of the Clintons may be in for a surprise.  While we do get some disturbing new information about President Clinton's liaison with former intern Monica Lewinsky, Crisis of Character reads more like the unpublished memoirs of MITCH RAPP than a tell-all on the machinations, real or imagined, of the 42th and almost 45th President.

Most of Crisis of Character is really about Byrne himself and his experiences working at the Secret Service and later, the Air Marshall Program.  He talks often about how inept the Secret Service was when kowtowing to political correctness (such as putting physically unfit people in guard positions to fill quotas) or in how their hands were tied due to civilians who thought they knew better (such as when staff to then-candidate Bill Clinton would push the Service to wave in people instead of inspecting them, or when a gay activist visiting the White House became incensed when told he couldn't put gay-themed stickers around the Mansion or the artifacts within them, insisting that 'they had won').

It should be noted that whenever the Service would screw up, or indeed whenever anyone would screw up, Byrne himself was not the person who did the actual screwing up.  When it came to President Bill Clinton's extramarital assignations, Byrne didn't do the screwing either. Instead, we see that to a point, Crisis of Character actually backs up the former President and First Lady's story: White House intern Monica Lewinsky, not the brightest bulb who if Byrne had had his way wouldn't have ever set foot on the grounds, was a stalker of sorts.  She would go into restricted areas, constantly coming up with weak excuses to be where she knew she shouldn't be (she got lost, she was looking for the restroom, she was visiting a friend, she was dropping things off).  It was an irritant to Byrne and the other agents, but eventually she managed to snare herself a President (and was unaware that she wasn't the only mistress gallivanting about, former Second Daughter Eleanor Mondale getting in on the action too).

The grotesque nature of the liaison (I'm not sure it would qualify as an actual affair) involves having the President's semen not just on that infamous blue dress, but on White House hand-towels that a Navy officer was forced to wash as part of his duties.  This whole thing disgusted our agent, especially given the difference between our Baby Boomer President and the last President from The Greatest Generation, dear Poppa Bush, who was dignity and kindness itself.

We then get the long, sordid saga of the Clinton impeachment, and how it wrecked his life when he got dragged into it.

Apart from this and the assertion that then First Lady Hillary Clinton knew of the liaisons (down to throwing things at the President), Crisis of Character really has little to nothing to do with the Clintons, in particular with how Hillary Clinton plotted for sixteen years to return to power in her own right as the first female President.

Instead, Crisis of Character tells us of the various exploits (both exciting and mundane) that Byrne went through.  I couldn't help think of the late Vince Flynn's most famous character: superspy and super-Patriot MITCH RAPP, a man who is the embodiment of the American Assassin.

Let me digress slightly to say that as much as I liked Flynn personally and found him to be highly talented, I never liked MITCH RAPP (the caps are always because he struck me as a staccato, monotone, monosyllabic person).  MITCH RAPP, in the two novels I read/heard about him, has no personality.  He has no family, no friends, no outside hobbies, no quirks, no sense of humor, no personal foibles, no life apart from kicking ass and killing people, especially if it means going against those in power.

Sure, he might have been motivated by his girlfriend being killed in the Pan Am bombing, but MITCH RAPP, at least the one I encountered, doesn't even appear capable of any human emotion, let alone love.  He doesn't appear to enjoy sports, doesn't read books, binge-watch shows, have any guilty pleasures, laugh at anything...in short, he to me is so cold and unlikable I really have a hard time getting through a MITCH RAPP book.

Listening to Crisis of Character, one feels that Byrne seems himself as a MITCH RAPP-type: tough, take-no-prisoners, at permanent guard, a master at weaponry and hunting down evil beings.  It borders on the comic, and to be honest, I skipped some parts because he went on and on about his various trainings, which might have been interesting if I went into the book wanting to learn that.

I went into the book wanting a reason to not have Madam Clinton be Madam President, why Hillary Clinton was unfit to follow Poppa Bush or even her own husband a la Evita Peron.  What I got was how great Gary Byrne was at his job.

If you want to learn about the machinations of the Clintons (real or imagined) or why she was not fit to have been Commander-in-Chief, skip Crisis of Character. 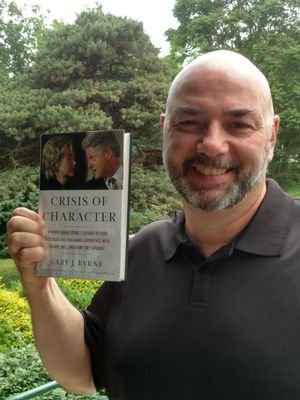