Module 2--The Westing Game: A Review The Westing Game is a child-centric mystery which has touches of And Then There Were None and The Casual Vacancy (though the latter was written long after The Westing Game) while I found it sometimes a dull read I also found that at times it was actually a bit clever.

Sixteen different people, some as families, some as singles, are brought together to live at Sunset Towers, a new high-rise apartment complex facing Lake Michigan and the home of Sam Westing, a fabulously wealthy but reclusive individual.  The various families live and sometimes work at Sunset.  There are the Hoos: son Doug, a track star, is a bit of a disappointment to his father James, who would rather his son help him and his new (and younger) Chinese wife at their restaurant on the top floor.  James also dislikes the competition he's getting from the coffee shop at the ground floor, run by the Theodorakis family: Theo, an aspiring writer, his disabled brother Chris, and their father George.

Also in the apartment is the Wexler family: podiatrist Jake (also a bookie), his uppity wife Grace, and their two daughters: the beautiful Angela and the miscreant Turtle (Tabitha-Ruth), who is passionate about the stock market despite being 13.  We also have seamstress Flora Baumbach, judge J.J. Ford, cleaning lady Berthe Erica Crow, doorman Sandy McSoutherns, delivery boy Otis Amber (boy being a misnomer given he's in his sixties) and Sydell Pulaski, a secretary who craves attention but was inserted into the Westing game by mistake.  Sydell was mistaken for a Sybil Pulaski when the group was brought together.

At first, the neighbors rarely interact, until they are named heirs to the Westing fortune.  However, Samuel Westing in his will tells them that he was really murdered...by one of them!  Further, in order to get the money they will be paired off, given a set number of clues, and then attempt from those clues to solve Westing's 'murder'.  We get them becoming suspicious of each other, there are few bombs that go off that except for Angela cause no real harm, and we find that the characters are in one way or another connected to the Westing family.  In the end, only Turtle really finds out the truth about Westing, but keeps her promise to remain silent.  We learn the fates of everyone involved in the Westing game in the end. 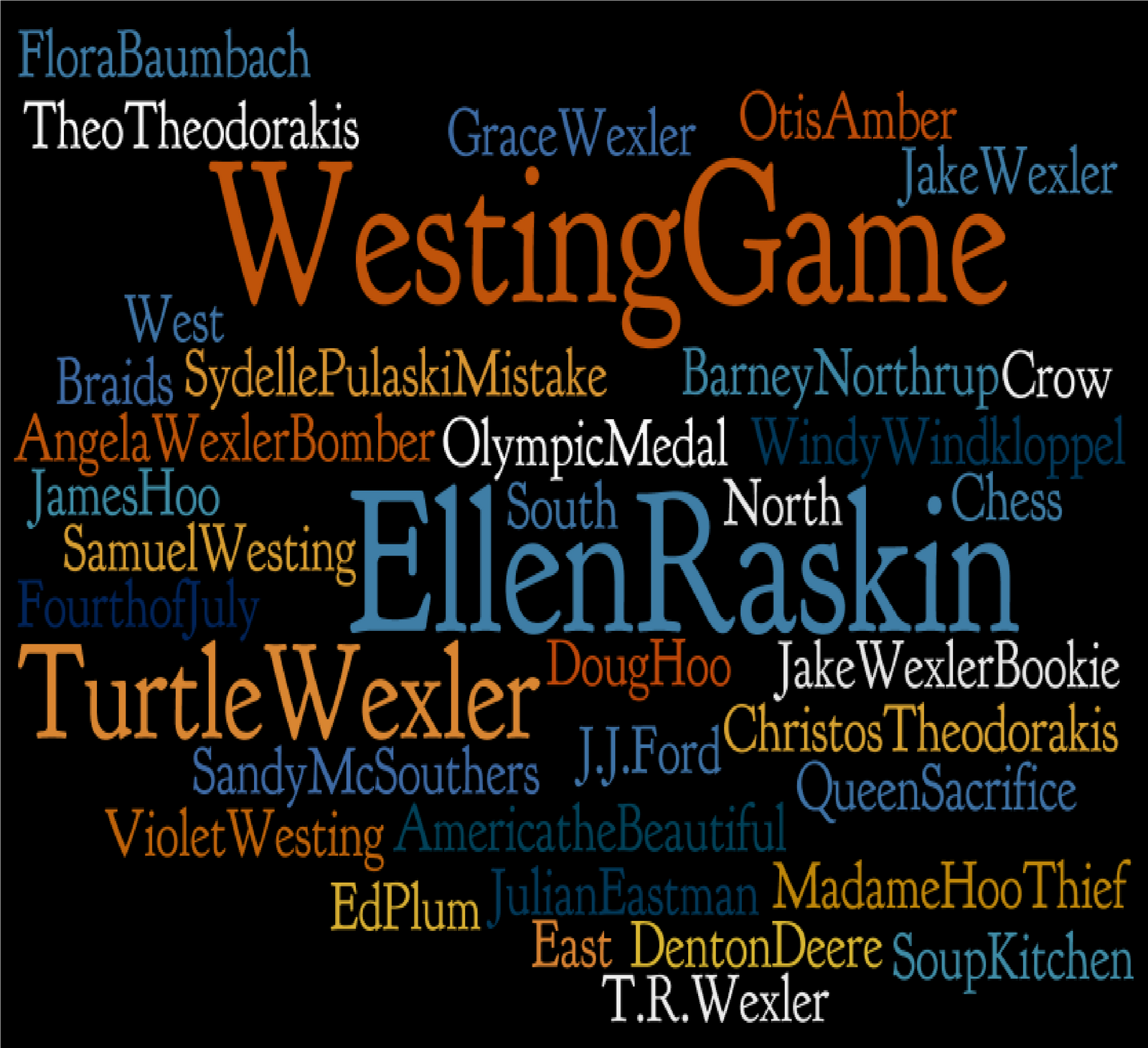 I don't know why The Westing Game is so beloved by people.  I remember back in middle school a lot of my friends/classmates read or knew about The Westing Game.  I didn't read it back then, and perhaps I would have enjoyed it if I had since back then, I was crazy about Agatha Christie.  However, reading it now I find it parts idiotic, parts mean-spirited.  The clues as I read them were clearly connected to the song America the Beautiful, but I kept wondering why none of the other characters until late in the game managed to think that.  Now, it might be that Raskin wanted the reader to know all that.  It is also true that the reader had all the clues while the characters just had a few.  However, even when I read just one or two of the groups America the Beautiful was the first thing to pop to mind, which made one of the character's names (Otis Amber) a really easy clue to figure out.

I said it had similarities, to me at least, to J.K. Rowling's The Casual Vacancy, and that has to do with the fact that I found pretty much everyone in the book unlikable.  Turtle I figure was suppose to be humorous in that she would kick anyone in the shins if they pulled her braids, but in the book, but I found her more annoying than endearing.  Granted, she did cover up for the real bomber, but I wasn't too thrilled with the idea of bombing in general (as benign as they might be).  Her mother Grace was the worst: virtually ignoring Turtle for the sake of Angela (who was pushed into marriage to the intern Dr. Deere, a real doctor, not like her unfortunately podiatrist husband), she was in many ways quite bigoted.  She wasn't too thrilled with the idea that her husband was Jewish, and made assumptions about Asians.  Crowe's religious fanaticism also didn't sit well with me, as if it were somehow mocking Christians as these wild-eyed loons.  Chris Theodorakis, who is disabled, is a result of an accident that left him both incapable of controlling his body and with a speech impediment.  That struck me as close to ridiculing the disabled.  Yes, he was really bright and in the end he got something of a cure (he never walked again but the spasms and speech were kept in control), but I still wasn't fond of it.

Raskin also used some now-unacceptable terms when describing people.  Flora's daughter died prior to the events of The Westing Game, and the child is referred to as a "Mongoloid", which for people with Down's Syndrome I think is a slur. 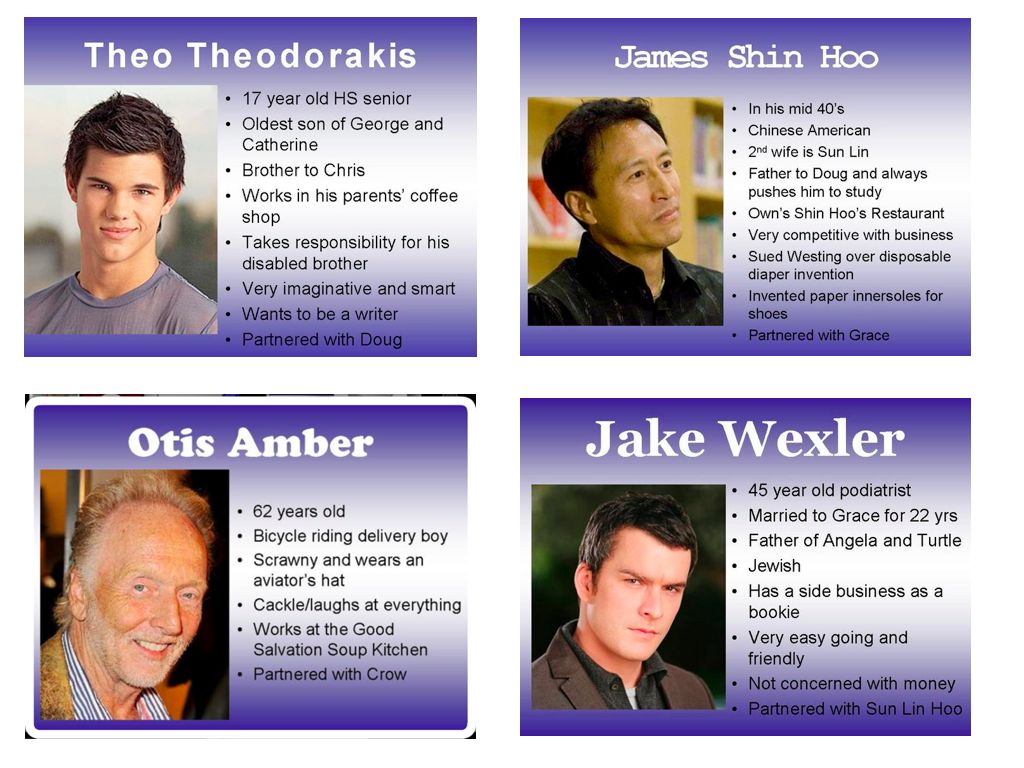 I had some questions about the plot as well.  Why go through all these bombings which if memory serves correct weren't connected or thinly connected to the mystery?  In the will, we get stage directions written into it (at one point, the lawyer reads from the text of the will, "Sit down Grace Wexler", but I think it's a little TOO convenient to know Grace would stand up in shock).

I did find the bit about 'directions' to be clever and something I wasn't expecting.   I also liked the fact that just about everyone, even the variations of Westing, got a happy ending of sorts.  I also as I noted said it reminded me of And Then There Were None in how all the characters are connected in a roundabout way.

However, on the whole I was surprised at the violence within it (all those bombs, one which left Angela scarred for life), I thought the plot didn't hold well together.  I didn't care who won the Westing Game and felt it buildup and praise for it is extremely exaggerated.

I find that in the last point, I am in the minority.  Elizabeth Bird, a New York City Public Library Youth Materials Collection Specialist, praised it as an ode to capitalism.  Roberto De Leon, a public library teacher, noted like I did the similarity to a Christie novel ("an elaborate homage to her favorite author Agatha Christie", he called it), and went on to call The Westing Game a masterpiece.  I wouldn't go that far.  I think younger readers might enjoy it, but for myself, I found no pleasure in The Westing Game and find it a terrible disappointment.   I do, however, see how it is similar to an Agatha Christie novel: a variety of suspects, many with secrets but not strictly connected to the crime, and gathering them to solve the crime.

As for any use in the library, perhaps a display for mystery novels would work.  I could offer also a scavenger hunt for clues, complete with a shadowy figure giving clues for prizes, or even a singing of America the Beautiful as it was a major plot point.

https://nerdybookclub.wordpress.com/2013/11/19/a-nerdy-retro-review-of-ellen-raskins-the-westing-game-by-roberto-de-leon/
Posted by Rick at 9:33 PM