The World Is Full of Crashing Phonies: The Catcher in the Rye Review 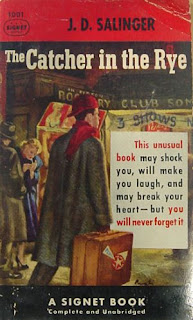 THE CATCHER IN THE RYE by J.D. Salinger (Modern Library Ranking: #64)

The Catcher in the Rye is one of those books to which angry young men seem to be drawn to.  I can understand the draw Catcher in the Rye has on them.  Holden Caulfield, our protagonist, seems to be the type of kid who is far too insightful into the world of adults.  The teen alienation and confusion of trying to be true to yourself while living in a world occupied by those not as all-seeing as oneself would appeal to those struggling through their growth into adulthood.

However, perhaps this is why I didn't get much enjoyment out of Catcher in the Rye.  I'm not a teenager.  I'm a thirty-year-old (plus) man, one who has grown to gain a little compassion for the flaws, faults, failings, and foibles of my fellow man (something that Holden appears incapable of).  Moreover, even as a teenager, I wasn't as self-confident of my own insights as Holden is, not so positive that the adults in the world were all putting on a show while I and only I was the real person.  Catcher in the Rye, I must admit, does capture the voice of the 'wise but troubled young man', but I wasn't as enamoured of what I took to be his self-absorption as he was.

Catcher in the Rye is Holden Caulfield's story told by him.  He tells us of how he has been expelled from yet another prep school due to his low grades.   His parents won't be thrilled, but he won't tell them he's been thrown out of Pencey, at least not yet.  After having to deal with those annoying classmates who drive him mad, he says farewell to his favorite Pencey teacher and then goes off to New York.

Here, Holden has what I like to think of as a "lost weekend".  Although still a minor, he manages to drink due to his height and bits of grey in his hair.  He smokes, often, and manages to hire a prostitute (Holden, despite his great interest in girls, is still a virgin).  That doesn't go well as the hooker and her pimp (the elevator attendant at the second-rate hotel Holden's staying in) manage to shake him down for a bit more cash.

He then goes to bars, dancing with pretty but vapid girls, meets remarkably pleasant nuns at Grand Central (which given that Holden's an atheist makes his liking of the sisters more interesting), goes to more bars where the entertainment is not to his liking because the piano players, singers, and actors all are now going through the motions (hence, they are also 'phonies'), and then arranges a date with another girl, Shirley.  Holden plays hot and cold with her: at one point telling her he loved her (which takes even him by surprise) but then leaving her at the skating rink when she tells him she won't run off to the woods with him (Holden having decided to basically withdraw from society).

Finally, he has two very important encounters.  There is Mr. Antolini, a favorite teacher from another prep school with whom he tries to take shelter with until he interprets Mr. Antolini's patting on his head while asleep as an attempt at sexual seduction.  The most important person to Holden (apart from his dead brother Allie, whom he holds in some awe) is his little sister Phoebe.  Holden sneaks into his home to see her one more time, before he 'heads out West', perhaps to work at some ranch, or maybe eventually meet his older brother D.B., a Hollywood screenwriter who 'sold out' by being a Hollywood screenwriter.

Phoebe is the sweetest yet brightest child you'll ever meet, trusting and direct.  Holden cannot abide that eventually she will enter a world filled with phonies, and when she asks him what kind of job he'd like (Phoebe is if anything sensible), he tells her he'd like to be a 'catcher in the rye', stopping children who are playing in the fields from falling over the cliff.

Eventually, as he prepares to leave, he leaves Phoebe a note at her school telling her of his plans.  What he sees as a final farewell is turned upside down when he spots Phoebe with her little suitcase, all ready to accompany her beloved brother.  Holden tells her she can't come, setting her to crying.  Eventually, he manages to calm her down by walking to the zoo (with her following across the street) and paying for her to ride the carousel.

However, he eventually faces the music, but we don't really know what happens after he makes Phoebe smile.  He appears to be in a mental hospital, and will speak no more. 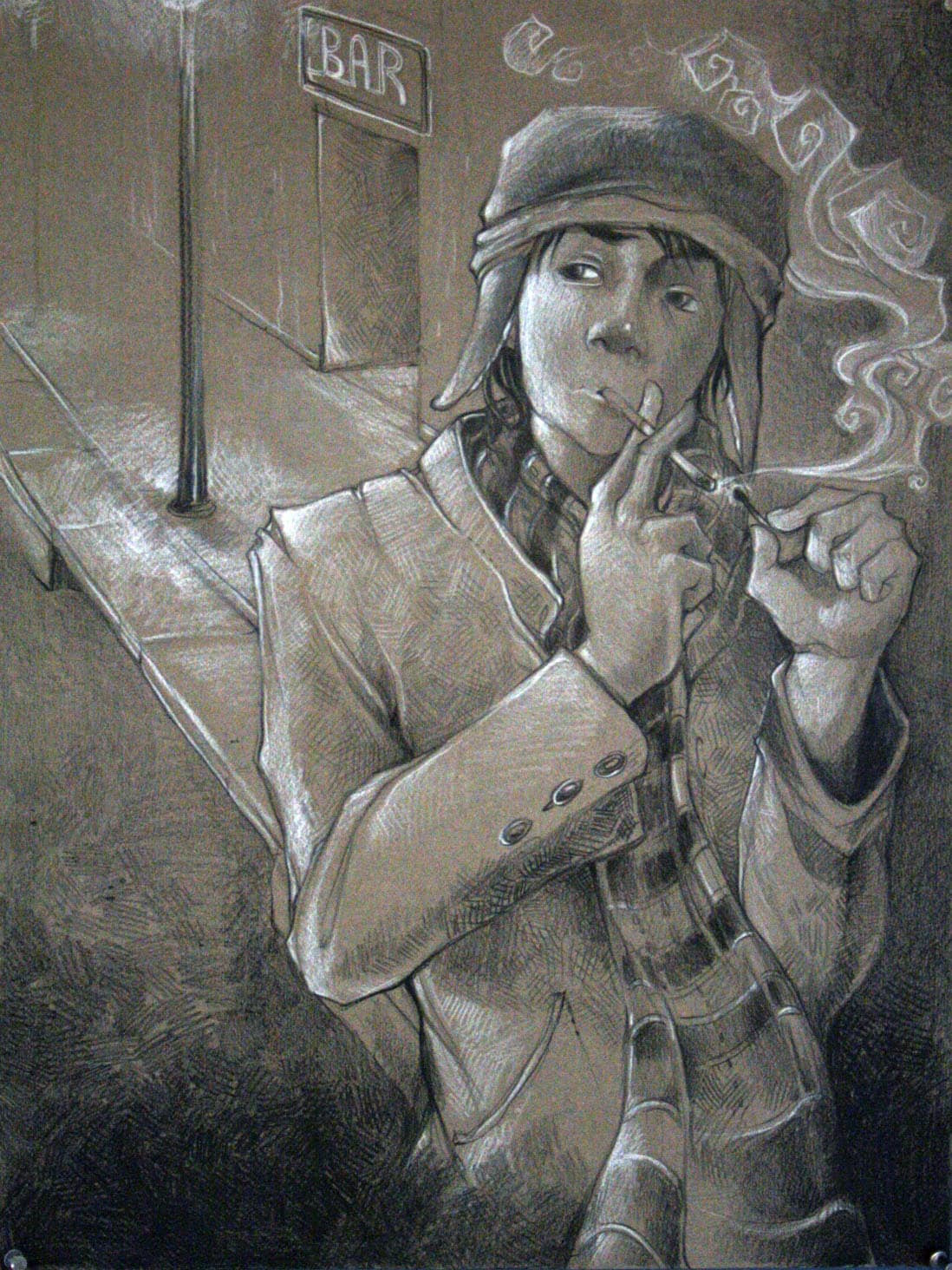 In terms of the writing, I think Salinger got the voice of this kid brilliantly (I say 'kid' because despite his airs of wisdom Holden STILL has a lot to learn).  We don't just have Holden's use of the vernacular (with his constant uses of 'Boy' as exclamations or his favorite way of describing someone he feels is inauthentic and trying to be something he either isn't or shouldn't be: 'phony').   We also get through Salinger the voice of a kid who is certain that he isn't a phony, but everyone else is save for Phoebe, the little girl who is sweet and honest and true.

Of course, I couldn't help DISLIKING Holden Caulfield and his rather smug and self-righteous views on everything.  He sat high above it all, holding every person save Phoebe in contempt for being phony.  However, what I got out of Holden's misadventures is that he was simply incapable of accepting people as they were: the flaws that all of us carry or the compassion to understand that people have said flaws.  His roommates were all jerks, the girls all dumb, the parents all status-seeking or unpleasant, even the good teachers were either clueless or even sexually deviant.

Perhaps this is how all teenage boys see themselves: smarter than their peers, more honest about things, yet using their supposed moral/intellectual superiority as a mask for their insecurity about women or in what one does after leaving the confines of formal education.  Holden gets a hooker, but can't follow through with exploring the pleasures of the flesh he knows his peers have indulged in.  He says he's an atheist, but the only people apart from Phoebe that he shows even the slightest admiration for are two teaching nuns he meets at Grand Central.

It doesn't help that I was never like that.  I never had great confusion about life during my teenage years.  What I had, if I had anything, was ambivalence about what to do and where to go.  Almost everything I've done has been more out of accident than forethought, thought as I get older I see that planning has its benefits.  I don't think I would have related well with Holden Caulfield if I had met him in high school, but then again perhaps not.

I'm not about to say that Catcher in the Rye is a bad book in terms of writing. That it is well-written I cannot argue: you get the authentic voice of a teenage boy who thinks he knows too much.  It is rather that I am not the target audience for it.  I'm a grown man, one who has more compassion for people than Holden has at the moment.

I can see why Holden Caulfield is the model for every angst-driven teen.  He is the father of every lost and confused young adult, the one who is obviously bright but obviously lost for some reason or another, who doesn't quite fit in to the dominant teenage image of dances and football games and goofy fun.  There is direct connection from Catcher in the Rye to Perks of Being a Wallflower.  For every mixed-up kid we see on the screen or on the page, they can trace their ancestry to one Holden Caulfield.

HOWEVER, in terms of enjoyment I didn't find any.  As I've stated I found Holden to be rather self-absorbed in his 'wisdom', his contempt for those not him or not in the same mindset irritating and presumptuous.  In short, I didn't LIKE Holden, though I too was enchanted by Phoebe and her honesty, sweetness and innocence.  It might be that all the flaws his classmates had I didn't see as particularly heinous sins, but instead stumbles into adulthood.

If one thinks about how Catcher in the Rye author J.D. Salinger ended up (reclusive, generally unpleasant, and not productive for decades), I'd say that Holden Caulfield eventually grew up to become Jerome David Salinger.  It was Salinger who ended up living Holden's dream of a life in the woods, keeping silent from the rest of the world, being distant from that world of phonies.

In short, Catcher in the Rye is a great book in terms of actual writing, capturing the voice of a disaffected (but in my view, rather dumb) youth.  The appeal is for those who think they have some secret wisdom, a greater insight into the ways of the world while simultaneously having little experience of it.  I can see and understand why teens, in particular boys (I don't know many teenage girls who see the world they way Holden Caulfield does), think Catcher in the Rye is 'their book', but for those who've long passed our 'rebellious' and/or 'questioning' phase, Holden Caulfield is less angsty youth and more whining know-it-all.