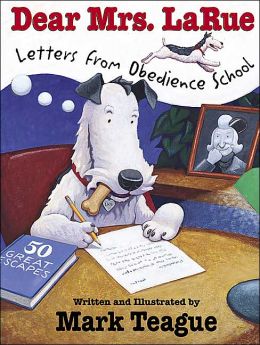 Dear Mrs. LaRue takes a humorous tone on the idea of both bad dogs and school in general as Ike, the dog in question, calling to mind how children could imagine school to be.

Ike, Mrs. LaRue's dog, has been sent away to the Igor Brotweiler Canine Academy.  It's really big news (down to making the local paper).  Ike hasn't been horrible, but Mrs. LaRue finds herself at wit's end,  misbehaving constantly.  Every day in his 'incarceration', Ike writes to Mrs. LaRue, describing all the horrors he must endure as well as pointing out that he wasn't as bad as all that.

His situations are grim: they take away his typewriter!  They won't give him seconds!  Of course, what Ike says and what is real need not necessarily be the same thing.  While he attempts to show how abysmal and horrific the setting is in black-and-white illustrations (complete with striped prison uniforms), the color illustrations show a rather posh setting.   In that same dining room, we see a lavish menu, elegant dining room, and an elegant atmosphere.  The truth or not, Ike runs away, riding in (misery/luxury) as he tramps around the country, until a fortuitous chance encounter where he saves Mrs. LaRue from certain death (even if he damages her camel's hair coat...again). The beauty of Dear Mrs. LaRue comes in the dichotomy between what Ike writes and what he is experiencing.  We see that Ike is in more Club Med than Shady Pines, but the humor comes in the exaggerated descriptions versus the actuality of the situations.

I think children will enjoy the story and relate to how Ike sees the world, with school really being not as bad as they think it.  Teague has a wonderful wit with beautiful illustrations extremely detailed to lend more humor.