Module 9--The Case of the Missing Marquess: An Enola Holmes Mystery: A Review 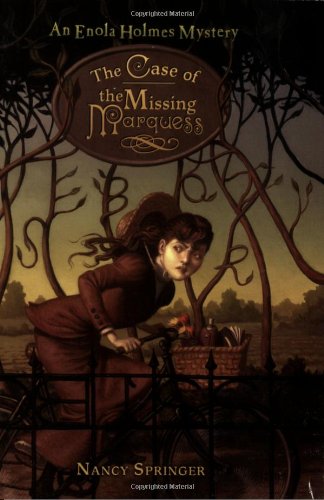 MODULE 9:
THE CASE OF THE MISSING MARQUESS: AN ENOLA HOLMES MYSTERY
by: Nancy Springer

Sherlock Holmes is a true icon of literature, one of the few fictional characters universally known and recognized.  Since his first story was published, Sherlock Holmes has spun all sorts of fictional works outside Canon (the Sherlock Holmes stories written by Sir Arthur Conan Doyle).   Minor Canon characters like Irene Adler (THE Woman) and Professor Moriarty (one of his greatest foes) have spun off their own adventures.

There are stories still being written that expand on the Holmes universe.  There are the Mary Russell stories (who went from being Holmes' protégé to his wife), The Final Solution (written by Michael Chabon) and even suggestions that another fictional character (Nero Wolfe) might be Sherlock Holmes' love child (with Irene Adler as the mother).  On television, the character of Holmes is the lead on two successful and acclaimed television series: BBC's Sherlock and CBS' Elementary.  There's also been a pair of successful Sherlock Holmes films with Robert Downey, Jr. and an upcoming film, Mr. Holmes, with Sir Ian McKellen as the Great Detective.

As such, it is not surprising that Conan Doyle's creation entered the children's/young adult book market.  There are the Boy Sherlock Holmes series, the Young Sherlock Holmes series, Sherlock, Lupin, and Me (a series centered around the child adventures of Holmes, Arsene Lupin, and the narrator, Irene Adler), and the book we're reviewing: The Case of the Missing Marquess.  This story is centered around a new character: Enola Holmes, who is the much younger sister of Sherlock and Mycroft Holmes.  The Case of the Missing Marquess is the first of the Enola Holmes stories, a strong debut for a character that is developing into a strong detective in her own right, and one who adds a strong teen's viewpoint to Canon.

Enola Holmes considers herself something of a scandal.  Her mother, Lady Eudoria Vernet Holmes, had her when she was forty, which is proof that Lady Holmes was having sex in later life, which shocks Victorian Britain.  The Widow Holmes and Enola live in Ferndell Hall, which has fallen on some hard times despite the wealth of the legal owner, Mycroft Holmes.  On Enola's fourteenth birthday, Lady Holmes disappears without a trace.  Alarmed, Enola sees no recourse but to contact both her brothers, Mycroft and Sherlock.  They rush to the hall, and are most displeased by everything.  Mycroft discovers that his mother has been misleading him about money, squirreling it away while telling him she needs it for upkeep.  Sherlock finds his mother's disappearance more an irritant, a sign of the mental weakness of the 'fair sex'.  All Enola wants is her mother, and for her brothers to like her.

Mycroft, however, has other ideas.  He's decided that since he's the legal owner of Ferndell Hall, and the head of the family, he has all authority over the sister he's barely acknowledged.  This means putting her in corsets, dressing her like his idea of a proper Victorian lady, and worse, sending her to boarding school.  Enola has loved the freedom she's had at Ferndell Hall, and finds Mycroft's actions intolerable.  As she is sent to a finishing school, complete with corset that constricts her breathing, she uses her wits to make a break for it, determined to get to London and discover a world she has heard about. She fortunately has help from her missing mother.  Lady Holmes loved cyphers, or word puzzles.  Enola, attempting to investigate her mother's disappearance, comes across these clues that she translates.  This leads her to various cash caches hidden throughout Lady Holmes' room, and Enola starts stashing not just the money but also various articles she will need in her journeys.  She even manages to hide a bicycle (which she rides with great skill) and outwits the driver.  Disguised as a widow, she begins her journey with no real plan save to keep searching for her mother.

On her way though, she finds herself distracted by a new case.  Viscount Tewksbury, Marquess of Basilwether, son of the Duke of Belvidere, has gone missing.  It is suspected that His Grace has been abducted.  Her curiosity gets the better of her, along with the fact that she feels a certain empathy for His Grace.  She sees his picture in the paper, and is appalled to see that despite being her own age he is still dressed in Little Lord Fauntleroy outfits, complete with curls in his hair.  Enola had come up with a pseudonym, but accidentally reveals her true name when she goes to the Belvedere estate.  She is mistaken for a representative of Sherlock, who could not come due to 'family matters'.  She even meets a Scotland Yard detective investigating the case, Inspector Lestrade.  He is intrigued by "Mrs. Holmes", but cannot pin her down.

Enola discovers that the Viscount has a secret treehouse where he frees himself from his mother the Duchess' excessive mothering.  She also discovers that it is no kidnapping: His Grace has run away, tired of Her Royal Highness' smothering ways.  Enola deduces he is travelling incognito and has set off for sea.  Interfering in her own investigation is a spiritualist, Madame Laelia Sibyl de Papaver, medium and "Astral Perditorian" (finder of lost things).  Enola takes an instant dislike to Madame Laelia, but the Duchess is under the spiritualist's spell.  Determined to find His Grace and get away from her brothers by conversely hiding out in London, Enola continues her travels.

She does find His Grace (whom she calls Tewky), but finds both their lives in danger.  A pair of ruffians has taken them and decided to hold them for ransom (against the Duchess and Holmes respectively).  Enola and Tewky escape and she takes him to Scotland Yard.  She even gets to see Holmes again, though he doesn't see her as she delivers His Grace and discovers that Cutter (the main thug) and Madame Laelia are one and the same!  He has been abducting people, then offering his services as the spiritualist to double dip on money (ransom and 'finder's fees').  She also knows that her mother is still out there, most probably travelling with the Gypsies Lady Holmes allowed to camp on her estate.  Enola Holmes receives cryptic messages through newspapers, urging her own.  Enola Holmes, who looks older than her fourteen years, now has set up her own consulting office.  She calls herself Ivy Meshle, secretary to a never-seen Dr. Leslie T. Ragostin, Scientific Perditorian. I found The Case of the Missing Marquess a much sharper story in the end than in the beginning.  I first thought the story would center around locating Lady Holmes, but then like Enola, we were taken into a legitimate mystery.  What I enjoyed was that Springer gave Enola something neither Sherlock or Mycroft could ever have: intelligence with insight.  I'm not talking about 'women's intuition'.  Rather, I'm talking about the common sense of a young woman who finds the restrictions on her allowing her to know more.

She, for example, came to the conclusion that the Viscount hated the curls and high collars of his infantile outfits because she hated the corset she was forced into.  By bringing in her own experiences into the investigation, she was able to deduce that the Viscount wanted freedom.  She also deduced that he would have a 'secret hideaway' as she had in Ferndell Hall.  By bringing in her own unique viewpoint, she is able to accurate pinpoint both Viscount Tewksbury's intentions but even the location of the ship he planned to board under an assumed name.

We also see that the missing mother was really just a framing device to give Enola a series of adventures that will serve an overarching story to supplement the other cases.

I didn't like Enola in the beginning.  She started off in my view as a bit whiny and self-pitying.  However, I should cut her some slack because she did lose her mother and wonders whether she is the cause of it.  She also has to deal with two much older brothers who don't think much of her.  Well, at least Mycroft doesn't.  Sherlock's views are more nuanced.  He is dismissive of women in general, but he does have a softer touch with Enola than the blustery Mycroft.

The case itself is solved pretty well and effectively.  It is interesting and has action, which I think will appeal to both girls and boys.  Girls will find commonality with a girl who is determined to break away from the restrictions and conventions of the times (which are captured very well by Springer, who uses Victorian terminologies like calling underwear 'unmentionables').  Both groups will I think like the mystery, and any Sherlock fan will find the name-dropping clever.  I also think boys will identify with Lord Tewksbury, finding his mother's overprotective nature something they can understand.

As someone who loves Canon, who thinks of himself as a Holmesian (Sherlockian now having been hijacked by fans of the BBC's Sherlock), I highly approve of Enola Holmes. In her review of The Case of the Missing Marquess, Mayra Jansen-Gruber remarks that the book shows the dark side of Victorian London.  This an accurate statement, as Springer talks about the seedy and dirty East End.  This is no world for a well-bred nobleman or a young girl from the upper class.  "It was a world where, of you were female and wanted to be yourself, you had to find a way around the system through subterfuge and careful planning. The author presents this world in its true and stark colors and yet she leaves us with the hope that Enola will indeed find what she is looking for."  This is also true, as we hear from Enola how unfair it is that Lady Holmes has no say in her own home, but that it is Mycroft who has all the authority merely because he happened to have been born first and born male.  Enola, like Lady Holmes, do have to work around the system to be independent, and at the end, we do want both of them to be free of all confinements...including corsets.

On the whole, I found The Case of the Missing Marquess to be a good read and a wonderful addition to Canon.  It almost makes one hope that Enola Holmes will pop up in either Sherlock or Elementary, a great addition to show the Holmes Brothers that little girls can be their equals.

A good program would be to have a mystery in the library.  We could also have a Victorian-era display or exhibit.  There is also the possibility of a flower show (since flowers were an important part of deciphering the ciphers), and a puzzle contest.  I also think having a Sherlock Holmes celebration of some kind is a great idea, maybe a birthday party where a space is left for his sister.  Finally, a display of Sherlock Holmes ranging from Basil Rathbone and my beloved Jeremy Brett right down to the current Holmes trio of Benedict Cumberbatch, Jonny Lee Miller, and Robert Downey, Jr., all to draw attention to how Sherlock Holmes is still popular...and who has a sister his equal.

Jansen-Gruber, M. [The Case of the Missing Marquess: An Enola Holmes Mystery Review].  Through the Looking Glass Children's Book Reviews. Retrieved from http://lookingglassreview.com/books/the-case-of-the-missing-marquess-an-enola-holmes-mystery
Posted by Rick at 4:57 PM