Integration can be a tough balancing act.  Sometimes one is pressured to conform to one's race/ethnicity to where you cannot be "American".  Other times, you want to move so far from your own heritage that you practically disown it.  American Born Chinese, a story based in part on author Gene Luen Yang's life, ties three seemingly separate stories together to form one large story about identity, stereotypes, and the importance of being 'you'.

The first story involves the traditional Chinese story of The Monkey King.  Having achieved deity status, the Monkey King leaves his domain to hobnob with the other gods.  However, because he is a monkey (and has no shoes) he is denied entry.  Infuriated, he attacks all the other deities and begins to cause such rampages through the various worlds of the other gods and goddesses, demons, and spirits that they all gather to seek out the Four Emissaries of Tze-Yo-Tzuh (He Who Is, THE God), begging for help.  Tze-Yo-Tzuh attempts to reason with the Monkey King, telling him that he is still a monkey and that He created him to be a monkey.  Despite the proof of Tze-Yo-Tzuh's power the Monkey King remains stubborn in his determination to show he isn't a monkey.  In near-desperation Tze-Yo-Tzuh buries the Monkey King under a rock, where he remains for five hundred years until the Monkey King realizes, through a monk, that he could have been freed if not for his own arrogance and pride.

The second story is that of Jin Wang, a second-generation Chinese-American who has moved from the confines of San Francisco's Chinatown to a predominantly white community.  As the only Chinese-American, he doesn't fit in, and somehow falls into a friendship with Wei-Chen Sun, recent émigré from Taiwan.  Over the course of their time, Jin falls for Amelia Harris, a nice white girl.  They do date, but her best friend Greg (whose hairstyle Jin has copied to be more 'Yankee' with curious results) asks him not to date her, telling Jin he's all wrong for her.  He never overtly says it's because he's Chinese, but Jin takes it as such.  Angry, he fights with Wei-Chen, who got him to lie for him about the date. 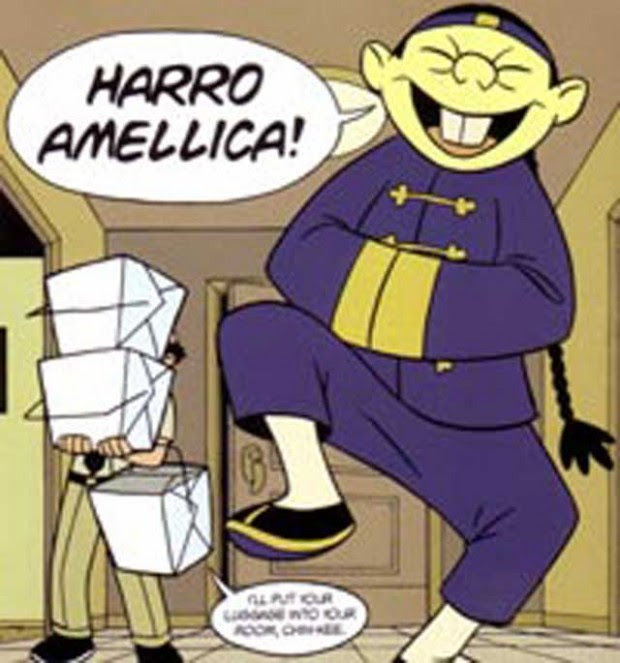 The third is on Danny, a blonde, blue-eyed American whose life is constantly turned into a nightmare whenever "Cousin Chin-Kee" comes.  Chin-Kee is every Chinese stereotype imaginable (and I figure a few more): buck-toothed, heavily accented, always wearing traditional Chinese clothes and a queue.  He also eats cats and dogs, openly lusts after American women, and is boorish to boot, embarrassing him at every opportunity with his horrifying manners.  Danny has had to move every year whenever Chin-Kee comes around, and has finally had it with this walking stereotype.  Danny hits him, but is no match for Chin-Kee's martial arts skills.

It's at this point that American Born Chinese gets all three stories and brings them together.  Chin-Kee is not real.  He is actually the Monkey King in disguise.  The Monkey King then tells him that since he's revealed himself, it's time for Danny to do the same.  He then transforms Danny into whom we learned earlier he really was: Jin Wang.  We also discover that Wei-Chen is the Monkey King's son, who had like his father become a disciple of the monk who had helped the Monkey King find who he really was and accept it.  Having grown disillusioned with humans (and having lied), Wei-Chen has walked away from the path, becoming self-indulgent and angry.  Eventually, Jin finds Wei-Chen, with the chance for both reconciliation and acceptance of who they are.

American Born Chinese is extremely clever in how it ties all three stories together.  It isn't as if there aren't clues to the eventual resolution (one wonders how the very white Danny could be related to someone like Chin-Kee), though I would argue that perhaps there was a little bit of cheating.  We don't get indication that Amelia and Melanie (the girl Danny fancies) might be one and the same or in any way connected.  I figure this was done to if not throw the reader off the track at least to have us concentrate on the horror that was Chin-Kee than anything else.

I however, see an anger in American Born Chinese.  Jin is resentful and angry about being asked to conform to odd ideas others have about Chinese-Americans (like the idea that they eat dogs, to which his teacher says to the class the family must have stopped doing when they came to America, even though Jin has never lived in China).  The Monkey King similarly is angry that he is constantly dismissed as a 'monkey' (even though he is one) by others.  He goes out of his way to master all sorts of disciplines to show how strong and powerful he is, but he still is a monkey.

Yang's biggest anger is reserved towards the Chin-Kee character.  It was only afterwards that it was pointed out to me that the name "Chin-Kee" was meant to read as 'Chinky", as in the ethnic slur 'chink'.  I remember how the term 'chink in the armor' was used in an ESPN article about rising basketball star Jeremy Lin; there was an uproar that cost the writer his job and reputation. Whether the ESPN writer was even aware of the term 'chink' or not is still unclear, and I for one think the matter was completely overblown, Anthony Federico (the writer) having been sacrificed to the altar of political correctness due to a commonly used term that he in all likelihood wasn't aware of its double meaning.

I can speak only for myself, but I was not aware that 'chink' was a racial slur against Asians and Chinese in general.  I also am aware of the term "chink in the armor".  I don't think Federico meant to use a slur when describing Lin (who by all accounts is a very nice guy and Tim Tebow-esque in terms of his Christianity, who has forgiven Federico in a way many people refuse to).  In short, the entire 'chink in the armor' brouhaha was in my view a group of highly sensitive people who seek out offense and think saying that if one is having 'a gay time' that person should be prosecuted for a hate crime against homosexuals.

However, while the entire Jeremy Lin situation was in my view wildly overblown and ESPN was in my view cowardly for not standing up for an employee who made an unwitting pun, the case of William Hung is another matter.  There is a very clear reason why Yang selected the Ricky Martin song She Bangs for Chin-Kee to sing, accent and all, to a horrified group of students at the library.

Hung was a civil engineering student from Hong Kong when he auditioned for the singing contest show American Idol.  His rendition of She Bangs was a horror: totally out-of-tune, and with an accent that made things in turns more hilarious and cringe-inducing.  The judges could not contain their laughter as Hung, who was thoroughly unaware of how awful he sounded, belted out this hip-swinging number, throwing in uncoordinated dancing in the process.  IF all that weren't enough, Hung's genuine cluelessness about it all added a layer of the bizarre to the proceedings.

William Hung was genuinely not in on the joke, that joke being himself.  America, and the world, laughed profusely at Hung: both at his total lack of talent but at his complete inability to understand that people were laughing at him.  His thorough lack of guile was oddly endearing, but Yang (and I imagine, many Asians) saw in Hung every stereotype of Chinese: buck-toothed, heavily accented, and highly intelligent academically but thoroughly dumb in other ways.  The fiasco of She Bangs did give Hung an odd musical career, but my guess was that Hung didn't get that people weren't cheering him on because they thought he was good.  They were cheering him on to either laugh at him or pity his ignorance.

Chin-Kee might not have been modeled on Hung per se, but I find it hard to believe that the walking stereotype picking that particular song was a mere coincidence.

I am a bit conflicted about American Born Chinese, though I'm not Asian myself.  I appreciate Yang's message that like the Monkey King, we can be only what we were created to be and that nothing can change who we are.  However, I am not comfortable with the idea that Yang might have that as someone from an Asian background (or black, or Hispanic) that a member of an ethnic/racial background pretty much has to 'stay in his/her place'.   Is Yang suggesting that Jin and his family would have been better off staying in Chinatown "among their own"?  Is Yang suggesting that those who are minorities should not want to join the majority culture, that somehow wanting to break away from the conventions of our distinct culture are on a fool's errand?

I don't think he is, and I think the theme of becoming something we are not is important, but I have no problem accepting Jin or Wei-Chen as American.  I think it is because my mother has an accent, and she is American through and through.  One's accent, one's looks, are not impediments to being American, but perhaps to Yang, the idea of a Chinese American who has faced some foolish bigotry joining the dominant culture is somehow wrong or impossible.  I don't accept that.

Granted, I may be reading too much into things, but one can't help bringing their own past when reading books that perhaps suggest that a monkey cannot aspire to be part of a world he wasn't born into regardless of how hard he works.

In his review of American Born Chinese, Ned Vizzini states that Tze-Yo-Tzuh is Yang's own invention and not based on Chinese myth (unlike the Monkey King).  If that is so, then Yang is proving an unreliable narrator, taking advantage of Western ignorance to take a stab at his audience.  It would be no different than if I threw some 'Mexican' legend from my own creation and tossed it at an unsuspecting audience.  That disappoints me if this is true, because Yang then is being a bit deceptive himself.

However, American Born Chinese is a well-written tale, that contrary to what Vizzini holds I think ties things together rather well.  The illustrations are quite excellent, and there is a lot of wit within the story (Jin's desire to be a 'transformer' having a wonderful double meaning).  It may not be strictly logical (again, how neither Danny/Jin's parents were unaware that Chin-Kee was not the other's sister's son, let alone how they would feel comfortable never attempting to modifiy Chin-Kee's boorish behavior doesn't make sense).  However, I don't think pure logic was what Yang was going for.  I'll take it as allegory, one with a very strong message.

I would offer a program of playing traditional Chinese music, or having a puppet show or a storyteller tell of the Monkey King (whom I was exposed to thanks to the special Big Bird in China). As there are illustrations, perhaps an art contest or program about "Being True to Yourself" as the theme.