Module 4--A Wrinkle in Time: A Review 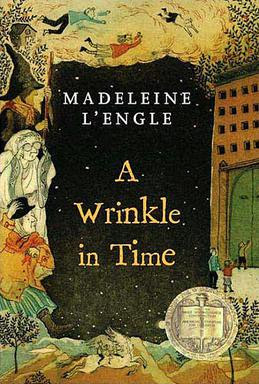 MODULE 4: A WRINKLE IN TIME by Madeleine L'Engle

A Wrinkle in Time has achieved both legendary status and controversy due to the same issue: the mystical/religious aspects of the book.  Some have found in A Wrinkle in Time too much religion, particularly Christianity, and some the opposite: too much occult/anti-Christian material in it.  I was pretty surprised at how open the book was in acknowledging the existence of God and Jesus in the world of fantasy.  This was neither a negative or selling point for me, as I found A Wrinkle in Time a good read, though a bit rushed for me.

Meg Murry is a pretty typical fourteen-year-old girl.  She has braces and glasses, and is carrying a lot of anger within her.  Her father, a scientist, has disappeared and rumors are going around that he ran off, maybe with another woman.  Mrs. Murry, a scientist in her own right, tells Meg and her other children: twins Sandy and Dennys and Charles Wallace, a five-year-old genius whom the town thinks is an idiot, that Mr. Murry has not abandoned the family but he has disappeared due to his work.  Charles Wallace is visited by the first of three figures he met while going to a 'haunted house': a figure dresses in many scarves and coats who calls herself Mrs Whatsit.  Mrs Whatsit is also seen by Meg and Mrs. Murry, who tells the latter that 'tesseract' is real.  This shocks Mrs. Murry.

Charles Wallace and a very reluctant Meg go to Mrs Whatsit's home, where they find Calvin O'Keefe, a thin redheaded freckled-faced boy, slightly older than Meg, who is a star athlete but from a troubled home who like Meg feels out of place.  Calvin senses that he has been 'invited' to go to the house, and the three of them next meet the second mysterious figure, Mrs Who, who speaks in phrases of various languages.  They and Mrs Which, the third figure who can never fully materialize but who has enormous spectacles and who speaks by elongating every word, whisk the three children off to help rescue Mr. Murry. Here, the three children go to various planets as they prepare to fight the dark force holding Mr. Murry prisoner.   The first planet is the beautiful Uriel, where they discover angelic voices singing excerpts from Psalm 96 (Sing unto the Lord a new song...) and get a glimpse into a Dark Being in a vision.  They visit The Happy Medium, a figure in turbans with a crystal ball who shows them Earth, a world half in darkness half in light that has been fighting the Dark Figure with such figures as Jesus, Bach, Gandhi, and Buddha among others.  They also learn that these beings, former stars, are able to travel quickly from one point in space to another thanks to tesseracting (or the ability to bend time to get from Point A to Point B through the fifth dimension).  This is what Mr. and Mrs. Murry had been working on, and which caused Mr. Murry's disappearance.

Now, with words of wisdom, the gift of Mrs Which's glasses, and warnings that they must all stay together, the children are sent to the planet Camazotz.   Here, everyone is literally the same: the children all act the same, the parents all act the same, there is total uniformity.  The children decide to go to the CENTRAL Central Intelligence Center.  Here, they discover the Man With the Red Eyes, an evil being who has the power to hypnotize everyone and bend them to his uniform will.  Charles Wallace's high intelligence makes him vulnerable to the power and he becomes enchanted.

He is really working for IT, a powerful brain that controls the group-think of Camazotz.  Meg and Calvin do discover Mr. Murry, who is held prisoner there because he refuses to succumb to group-think; with the Man With the Red Eyes growing in power, Mr. Murry tesseracts the two of them to another world via Mrs Which's glasses.

The trip nearly kills Meg, who is angry that her beloved father couldn't rescue Charles Wallace and left him on Camazotz.  On the new planet of Ixchel, Meg is nursed back to health by Aunt Beast, a seemingly frightening-looking creature with four arms and tentacles but who is really gentle.  The Three Ws reappear, and give Meg the task of rescuing Charles Wallace.  She has one thing IT does not have, and back on Camazotz the normally kind Charles Wallace is sarcastic towards his 'dear sister'.  Finally, Meg realizes what she has that IT doesn't have: love.  Her love breaks the spell on Charles Wallace, and they all escape back to Earth by being tesseracted by the Three Ws. Calvin and Meg have fallen in love, and it adds to the joy of the family reunion where the Murrys are brought together at last. 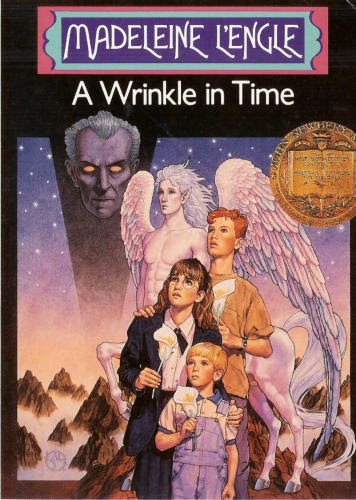 One thing that A Wrinkle in Time has as a positive is relatable characters.  Meg, Calvin, and Charles Wallace read as real kids. There's the angry and insecure Meg, constantly talking herself down.  There's Calvin, the outwardly outgoing star athlete who hides an unhappy homelife where he is basically ignored by his family and feels out-of-place himself.  Charles Wallace (he is almost always to by his first and middle name): the bright child-genius who accepts his gift with a certain nonchalance.  The relationship between Meg and Charles Wallace, and the one that grows between Meg and Calvin, are believable.

There is a great fantastical vision in A Wrinkle in Time.  You've got the funny Three Ws, who are all unique characters. They have their own characteristics that makes them easily identifiable.  There is the quest: the search for the father.  You have an overwhelming sense of danger and fear with The Man With the Red Eyes.

Where I think A Wrinkle in Time kind of went off for me was with IT.  The idea of a disembodied brain being the center of this dark world strikes me as almost funny.  Somehow, all the evil or totalitarian nature of Camazotz being brought on by a brain seemed a pretty odd figure.  Why not have The Man With the Red Eyes be the actual dark figure?

Also, after the rescue, Mr. Murry didn't seem to be that big a part of the story.  I think he is almost a plot device, a reason for the quest but who doesn't enter into the story itself.

These are really minor points because the description of Camazotz as this dark place where everyone is the same is frightening. The descriptions of the other worlds is also well-done.

I don't think A Wrinkle in Time is meant to be Christian allegory like C.S. Lewis' Chronicles of Narnia.  We do have quotes from the Old and New Testament (Aunt Beast quotes a version of Romans 8:28--"we are called according to His Purpose", and Mrs Who quotes a version of 1 Corinthians 1:27--"He uses the foolish things of the world to shame the wise").  There is the acknowledgement of evil and of Supreme Being (that being God in the Judeo-Christian tradition).  However, I don't read A Wrinkle in Time as symbolic of a Christian story (unlike Lewis' The Lion, The Witch, and The Wardrobe, which is symbolic of Christ's Death and Resurrection).  I don't think IT the brain is meant to represent Satan or Camazotz to be Hell.

Camazotz, however, could be something like Hell because the uniformity where everyone is exactly alike, all controlled by one being who decides all things for them and who punishes nonconformity, is a nightmare place.  Whether L'Engle meant to represent something like the Soviet Union or some other dictatorship I don't know.  However, it is open to interpretation.

A review for A Wrinkle in Time comments on how Meg's "refreshingly believable behavior resonated with" the reviewer, and I can see how that is possible.  The main characters are not perfect (they can be excessively self-assured or frightened and angry), but that's what makes them real.  I think young readers will appreciate that the characters were not perfect, in short, like them.   All the human characters are quite relatable, which works for the target audience.  The non-human characters are amusing or frightening when they have to be, and with some switches in perception (Aunt Beast being really kind despite her frightening looks) children will appreciate that judging by appearances is wrong.   I think that A Wrinkle in Time might make others want to read the other stories in the series.  I personally can take it or leave it, but wouldn't begrudge others who would like to learn more.

I don't know what kind of program one could create for A Wrinkle in Time.  There might be a dress-up contest where children are invited to come as one of the Three Ws (Mrs Which would be the most creative since she never fully materializes) or Aunt Beast (which can lead to equally imaginative costumes).  We might sponsor a quiz-type contest to find the next Charles Wallace, and if one wanted to really frighten children, put in some Men With Red Eyes around the library for children to discover, maybe even have a staff member pop up with red eyes.  Hopefully though, they will find older children to scare.

[Review of the book A Wrinkle in Time by Madeleine L'Engle].  Retrieved from http://www.cmlibrary.org/readers_club/reviews/tresults.asp?id=1952